(The Center Square) – Republican senators issued Gov. Tom Wolf an ultimatum on Thursday in yet another effort to derail the state’s entry into the Regional Greenhouse Gas Initiative.

In a letter to Wolf signed by 27 members of the Senate Republican Caucus and Sen. John Yudichak, I-Luzurne, the lawmakers said they would not confirm his nominee for the Pennsylvania Public Utility Commission until he withdraws an executive order committing the state to join RGGI next year.

“We have made it clear over the past 19 months that this is about the balance of powers in Pennsylvania,” said Sen. Joe Pittman, R-Indiana, who likened RGGI to a carbon tax on power producers. “It is dangerous precedent to tolerate the governor unilaterally imposing a tax. This moratorium on confirmation of PUC nominees is a reminder to the governor that Pennsylvania has three distinct and co-equal branches of government.”

Wolf first nominated Hayley Book, a senior adviser on energy and climate to Department of Environmental Protection Secretary Patrick McDonnell, in August. She’s one of several dedicated staffers working on the state’s impending entry into RGGI.

When the chamber adjourned for the legislative session in November without confirming his pick, Wolf renominated Book in January. The deadline for action on her appointment is next month.

But Senate Republicans, who control the chamber, said they won’t act until Wolf pulls the plug on RGGI. The 11-state pact charges power producers for greenhouse gases emitted from their facilities and reinvests the proceeds into projects and programs that support improved air quality or energy efficiency.

McDonnell also estimates that gross domestic product in the state would grow by $2 billion while producing 27,000 clean energy jobs and more than $6.3 billion in health benefits over the next decade.

“Given the overwhelming evidence of what we are seeing in the comments and the polling, that’s what leads us to be confident in making the statement that this is something the residents of Pennsylvania want,” he said.

Lawmakers say their constituents don’t support RGGI at all, however. Last year, a proposal to halt the state’s entry into the program until the Legislature approves the action passed both chambers with bipartisan support. Wolf vetoed the bill in September. 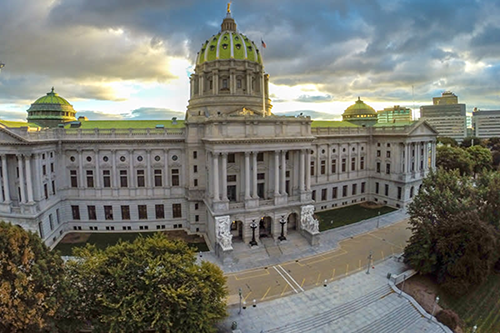